What is diabetic eye disease? 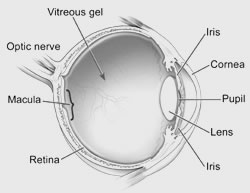 Diabetic eye disease can affect many parts of the eye, including the retina, macula, lens and the optic nerve.

Diabetic eye disease is a group of eye conditions that can affect people with diabetes.

All forms of diabetic eye disease have the potential to cause severe vision loss and blindness.

What is diabetic macular edema (DME)?

Who is at risk for diabetic retinopathy?

What are the symptoms of diabetic retinopathy and DME?

The early stages of diabetic retinopathy usually have no symptoms. The disease often progresses unnoticed until it affects vision. Bleeding from abnormal retinal blood vessels can cause the appearance of floating spots. These spots sometimes clear on their own. But without prompt treatment, bleeding often recurs, increasing the risk of permanent vision loss. If DME occurs, it can cause blurred vision.

How are diabetic retinopathy and DME detected?

Diabetic retinopathy and DME are detected during a comprehensive dilated eye exam that includes:

A comprehensive dilated eye exam allows the doctor to check the retina for:

If DME or severe diabetic retinopathy is suspected, a fluorescein angiogram may be used to look for damaged or leaky blood vessels. In this test, a fluorescent dye is injected into the bloodstream, often into an arm vein. Pictures of the retinal blood vessels are taken as the dye reaches the eye.

How can people with diabetes protect their vision?

Studies such as the Diabetes Control and Complications Trial (DCCT) have shown that controlling diabetes slows the onset and worsening of diabetic retinopathy. DCCT study participants who kept their blood glucose level as close to normal as possible were significantly less likely than those without optimal glucose control to develop diabetic retinopathy, as well as kidney and nerve diseases. Other trials have shown that controlling elevated blood pressure and cholesterol can reduce the risk of vision loss among people with diabetes.

How is DME treated?

DME can be treated with several therapies that may be used alone or in combination.

Anti-VEGF Injection Therapy. Anti-VEGF drugs are injected into the vitreous gel to block a protein called vascular endothelial growth factor (VEGF), which can stimulate abnormal blood vessels to grow and leak fluid. Blocking VEGF can reverse abnormal blood vessel growth and decrease fluid in the retina. Available anti-VEGF drugs include Avastin (bevacizumab), Lucentis (ranibizumab), and Eylea (aflibercept). Lucentis and Eylea are approved by the U.S. Food and Drug Administration (FDA) for treating DME. Avastin was approved by the FDA to treat cancer, but is commonly used to treat eye conditions, including DME.

The NEI-sponsored Diabetic Retinopathy Clinical Research Network compared Avastin, Lucentis, and Eylea in a clinical trial. The study found all three drugs to be safe and effective for treating most people with DME. Patients who started the trial with 20/40 or better vision experienced similar improvements in vision no matter which of the three drugs they were given. However, patients who started the trial with 20/50 or worse vision had greater improvements in vision with Eylea.

Avastin, Lucentis, and Eylea vary in cost and in how often they need to be injected, so patients may wish to discuss these issues with an eye care professional. 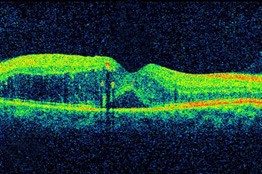 The retina of a person with diabetic retinopathy and DME, as viewed by optical coherence tomography (OCT). The two images were taken before (Top) and after anti-VEGF treatment (Bottom). The dip in the retina is the fovea, a region of the macula where vision is normally at its sharpest. Note the swelling of the macula and elevation of the fovea before treatment.

Focal/grid macular laser surgery. In focal/grid macular laser surgery, a few to hundreds of small laser burns are made to leaking blood vessels in areas of edema near the center of the macula. Laser burns for DME slow the leakage of fluid, reducing swelling in the retina. The procedure is usually completed in one session, but some people may need more than one treatment. Focal/grid laser is sometimes applied before anti-VEGF injections, sometimes on the same day or a few days after an anti-VEGF injection, and sometimes only when DME fails to improve adequately after six months of anti-VEGF therapy.

For decades, PDR has been treated with scatter laser surgery, sometimes called panretinal laser surgery or panretinal photocoagulation. Treatment involves making 1,000 to 2,000 tiny laser burns in areas of the retina away from the macula. These laser burns are intended to cause abnormal blood vessels to shrink. Although treatment can be completed in one session, two or more sessions are sometimes required. While it can preserve central vision, scatter laser surgery may cause some loss of side (peripheral), color, and night vision. Scatter laser surgery works best before new, fragile blood vessels have started to bleed. Recent studies have shown that anti-VEGF treatment not only is effective for treating DME, but is also effective for slowing progression of diabetic retinopathy, including PDR, so anti-VEGF is increasingly used as a first-line treatment for PDR.

What is a vitrectomy?

A vitrectomy is the surgical removal of the vitreous gel in the center of the eye. The procedure is used to treat severe bleeding into the vitreous, and is performed under local or general anesthesia. Ports (temporary water-tight openings) are placed in the eye to allow the surgeon to insert and remove instruments, such as a tiny light or a small vacuum called a vitrector. A clear salt solution is gently pumped into the eye through one of the ports to maintain eye pressure during surgery and to replace the removed vitreous. The same instruments used during vitrectomy also may be used to remove scar tissue or to repair a detached retina.

Vitrectomy may be performed as an outpatient procedure or as an inpatient procedure, usually requiring a single overnight stay in the hospital. After treatment, the eye may be covered with a patch for days to weeks and may be red and sore. Drops may be applied to the eye to reduce inflammation and the risk of infection. If both eyes require vitrectomy, the second eye usually will be treated after the first eye has recovered.

What if treatment doesnt improve vision?

An eye care professional can help locate and make referrals to low vision and rehabilitation services and suggest devices that may help make the most of remaining vision. Many community organizations and agencies offer information about low vision counseling, training, and other special services for people with visual impairment. A nearby school of medicine or optometry also may provide low vision and rehabilitation services.

Stop struggling with your eyesight! Now is the time to schedule your free LASIK consultation with Dr. Bryan and Dr. Shaw at Carolina Ophthalmology and find out if you’re a candidate for laser vision correction. Why not take our Self Evaluation Test to get started?